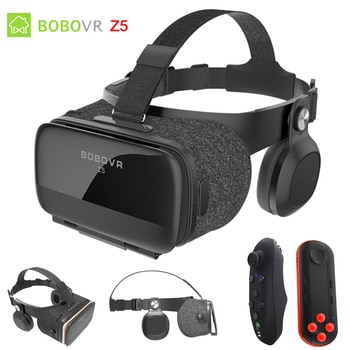 The BOBOVR Z5 is a virtual reality smartphone headset made by Xiaozhai, which is considered to be one of the best virtual reality companies when it comes to producing affordable mobile VR headsets. The VR headset manufacturer is based in China. The BOBOVR Z5 is a direct follow-up to the BOBOVR Z4, which generally received positive feedback and reviews from users as one of the best affordable Google Cardboard mobile HMDs in the market.

The Windows Mixed Reality Bobovr Z5 is comfortable and easy to adjust as you experience different apps while walking wherever you want. Immerse yourself in a whole new world with technology to break you out and free you up. For a more immersive feeling freely move through your virtual environment within the Six Degrees of Freedom (6 DoF). Getting started is easy with Windows 10 because as soon as you connect the headset to a computer it installs the software needed to use. For greater flexibility and freedom World Scale Windows Mixed Reality gives users the ability to interact directly with their environment.